The Dallas-area made up some of the losses from earlier in the pandemic.

More than 60% of U.S. metro areas had lost construction jobs at midyear. But building sector jobs in the Dallas area were higher than in June 2019, according to a new report by the Associated General Contractors of America.

Because of the pandemic, construction employment was down in 225 of the major U.S. markets the contractors association tracked at midyear.

In the Dallas area, there were 1,400 more construction sector employees than in June 2019. About 900 local building jobs were added between May and June.

Fort Worth lost 1,000 construction jobs in the one-year period.

The annual declines in construction sector employment came despite a rebound in jobs during the month of June.

“Those gains were not enough to erase the huge losses in March and April,” Ken Simonson, the contractors association’s chief economist, said in the new report. “Many indicators since the employment data were collected in mid-June suggest construction employment will soon decline, or stagnate at best, in much of the country.”

And the Austin area had the biggest gain in building sector employment, with 4,100 more jobs than in June 2019, according to the contractors group.

Construction employment in the Houston area was down by 12,000 jobs year-over-year — the second-largest decline I the country. And in Midland, there were 10,500 fewer construction workers than in June 2019.

Statewide, there were 27,900 fewer construction workers employed in June from a year earlier.

At the end of June, total employment in the Dallas-Fort Worth area was down by more than 141,000 jobs than at the same point in 2019, according to the latest numbers from the U.S. Bureau of Labor Statistics.

The year-over-year-job loss in North Texas, while still substantial, is less than in April and May when local employment was down by more than 200,000 jobs from a year earlier.

The increase in Dallas-area construction jobs comes even though building starts in the area are down this year.

The Dallas-Fort Worth area saw a 2% decline in starts of commercial buildings and apartments in the first half of 2020.

That still made D-FW the third-busiest commercial and multifamily building market in the country, according to Dodge Data & Analytics. 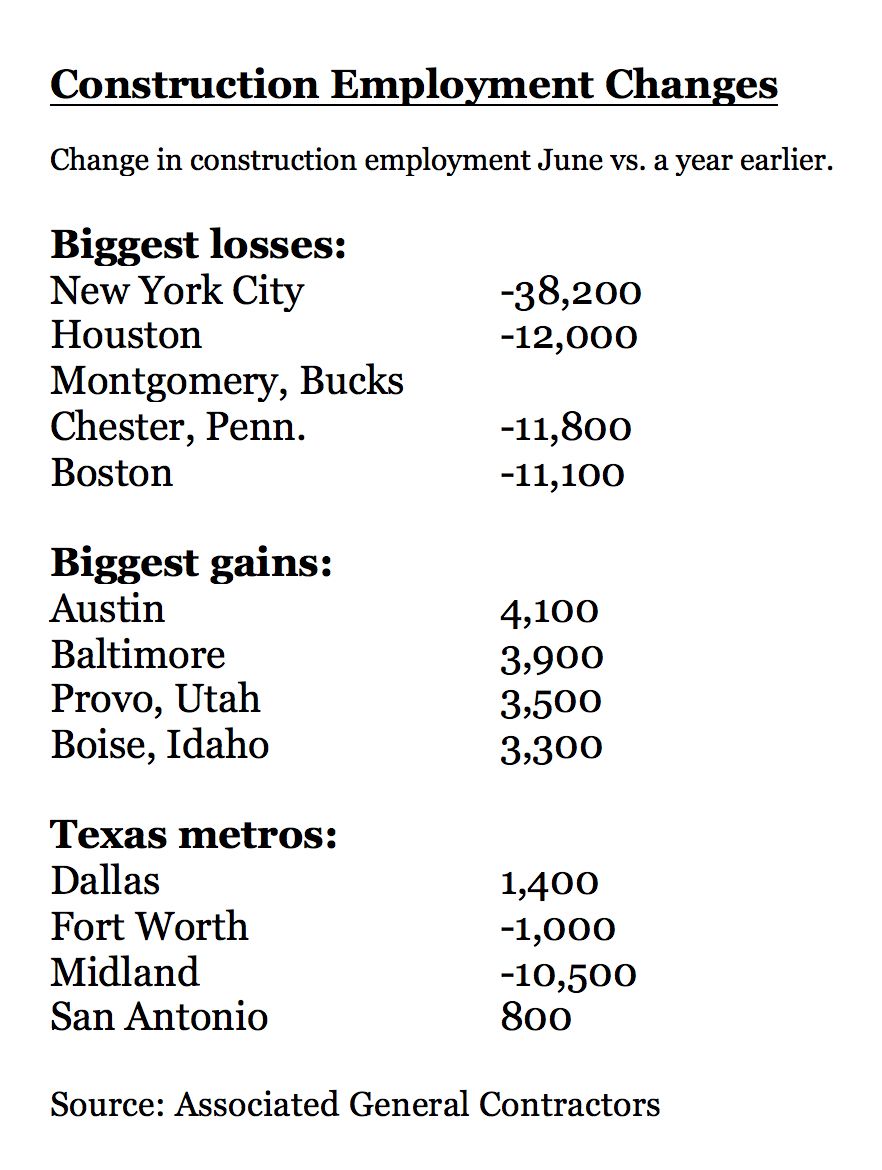